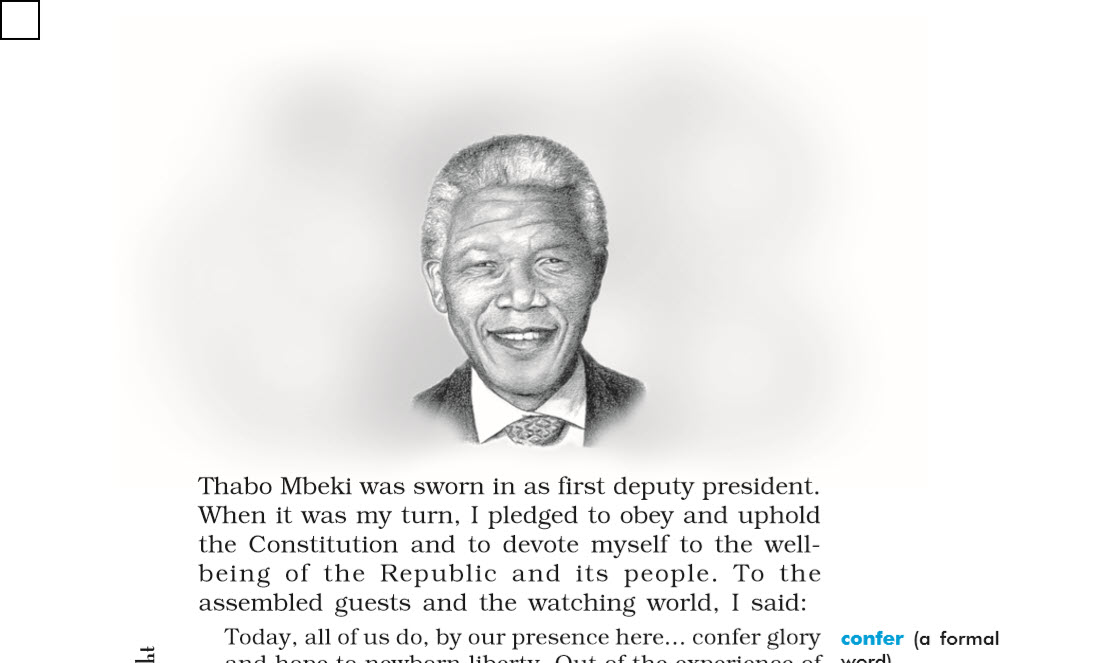 Nelson Mandela (Nelson Rolihlahla Mandela, byname Madiba) was born July 18, 1918, Mvezo, South Africa and died December 5, 2013, Johannesburg), He was the first black president of South Africa (1994–1999). He is known for his struggle against the policy of discriminations on the basis of race and colour of the skin. During his struggle against racial segregation he was infamously incarcerated at Robben Island Prison (1964–82). He won the Nobel Prize for Peace in 1993, along with South Africa’s president at the time, F.W. de Klerk, for having led the transition from apartheid to a multiracial democracy.

Watch the video tutorial for word by word explanation of the Lesson Nelson Mandela: Long walk to Freedom

Q1. Where did the ceremonies take place? Can you name any public buildings in India that are made of sandstone?

Answer: The swearing ceremonies took place at the sandstone amphitheatre situated on the campus of the Union Building of Pretoria. Examples of sand stone public buildings In India -The  Rashtrapati Bhavan in New Delhi, the Supreme Court of India in New Delhi.

Answer: 10 May is an ‘autumn day’ in South Africa because on this day there was the largest gathering of international leaders on South African soil for the installation of South Africa’s first democratic, non-racial government.

Q4. What does Mandela thank the international leaders for?

Answer: Mandela felt privileged to be the host to the nations of the world because not too long ago, the South Africans were considered outlaws. He thus thanked all the international leaders for having come to witness his investiture as President since this event could be considered as a common victory for justice, peace and human dignity.

Q5. What ideals does he set out for the future of South Africa?

Answer: Mandela set out the ideals of poverty alleviation, removal of suffering of people. He also set the ideal for a society where there would be no discrimination based on gender or racial origins.

Q1. What do the military generals do? How has their attitude changed, and why?

Answer: The highest military generals of the South African defence force and police saluted Mandela and pledged their loyalty.

Their attitude towards blacks had taken great change. Instead of arresting a black they saluted him.

Answer: On the day of the inauguration, two national anthems were sung, one by the whites, and the other by the blacks. This symbolized the equality of blacks and whites.

Q3. How does Mandela describe the systems of government in his country (i) in the first decade, and (ii) in the final decade, of the twentieth century?

(i) In the first decade of the twentieth century, the white-skinned people of South Africa patched up their differences and erected a system of racial domination against the dark-skinned people of their own land, thus creating the basis of one of the harshest and most inhumane societies the world had ever known.

(ii) In the last decade of the twentieth century, the previous system had been overturned forever and replaced by one that recognized the rights and freedoms of all peoples, regardless of the colour of their skin.

Q4. What does courage mean to Mandela?
Answer: For Mandela courage does not mean the absence of fear but a victory over fear. According to him brave men need not be fearless but should be able to conquer fear.

Q`5. Which does he think is natural, to love or to hate?
Answer: For Mandela, love comes more naturally to the human heart than hate.

Q2. What did being free mean to Mandela as a boy, and as a student? How does he contrast these “transitory freedoms” with “the basic and honourable freedoms”?

Answer: Like any other kid for Mandela also the freedom meant a freedom to make merry and enjoy the blissful life. Once anybody becomes an adult then antics of childhood looks like transitory because most of the childish activity is wasteful from an adult’s perspective. Once you are adult then someday you have to earn a livelihood to bring the bacon home, then only you get an honourable existence in the family and in the society.

Q4. How did Mandela’s understanding of freedom change with age and experience?
Answer: With age Nelson Mandela realised that he had a lot of responsibilities of his people, his community and his country. As a boy, Mandela did not have a hunger for freedom because he thought that he was born free. He believed that as long as he obeyed his father and abided by the customs of his tribe, he was free in every possible manner. He had certain needs as a teenager and certain needs as a young man. Gradually, he realized that he was selfish during his boyhood. He slowly understands that it is not just his freedom that is being curtailed, but the freedom of all blacks. It is after attaining this understanding that he develops a hunger for the freedom of his people.

Q5. How did Mandela’s ‘hunger for freedom’ change his life?
Answer: Mandela realized in his youth that it was not just his freedom that was being curtailed, but the freedom of all blacks. The hunger for his own freedom became the hunger for the freedom of his people. This desire of a non-racial society transformed him into a virtuous and self-sacrificing man. Thus, he joined the African National Congress and this changed him from a frightened young man into a bold man

I. There are nouns in the text (formation, government) which are formed from the corresponding verbs (form, govern) by suffixing − (at) ion or ment. There may be change in the spelling of some verb − noun pairs: such as rebel, rebellion; constitute, constitution.

1. Make a list of such pairs of nouns and verbs in the text.

Q2. Read the paragraph below. Fill in the blanks with the noun forms of the verbs in brackets.

Martin Luther King’s __________ (contribute) to our history as an outstanding leader began when he came to the __________ (assist) of Rosa Parks, a seamstress who refused to give up her seat on a bus to a white passenger. In those days American Blacks were confined to positions of second-class citizenship by restrictive laws and customs. To break these laws would mean __________ (subjugate) and __________ (humiliate) by the police and the legal system. Beatings, __________ (imprison) and sometimes death awaited those who defied the System. Martin Lither King’s tactics of protest involved non-violent __________ (resist) to racial injustice.

Martin Luther King’s contribution (contribute) to our history as an outstanding leader began when he came to the assistance (assist) of Rosa Parks, a seamstress who refused to give up her seat on a bus to a white passenger. In those days American Blacks were confined to positions of second-class citizenship by restrictive laws and customs. To break these laws would mean subjugation(subjugate) and humiliation (humiliate) by the police and the legal system. Beatings, imprisonment(imprison) and sometimes death awaited those who defied the System. Martin Luther King’s tactics of protest involved non-violent resistance (resist) to racial injustice.

II. Here are some more examples of ‘the’ used with proper names. Try to say what these sentences mean. (You may consult a dictionary if you wish. Look at the entry for ‘the’)

1. Mr Singh regularly invites the Amitabh Bachchans and the Shah Rukh Khans to his parties.
2. Many people think that Madhuri Dixit is the Madhubala of our times.
3. History is not only the story of the Alexanders, the Napoleons and the Hitlers, but of ordinary people as well.
Answer
1. This means that Mr Singh regularly invites famous personalities such as Amitabh Bachchan and Shah Rukh Khan to his parties.

2. This means that Madhuri Dixit is compared to a landmark in acting in the form of legendary actress Madhubala.

3. This means that history is not only the story of the great fighters and leaders such as Alexander, Napoleon and Hitler, but also of ordinary people.

III. Match, the italicised phrases in Column A with the phrase nearest meaning in Column B. (Hint: First look for the sentence in the text which the phrase in column A occurs.)